When we sold our house and moved into an RV, we had to give away a ton of our stuff so that we could start living minimally in a smaller space. We gave away a lot of stuff to family members, had neighbors come by and take whatever they wanted, we had Salvation Army come to our home to do a big pickup, and more. We didn’t sell a single thing, instead we gave it all away. 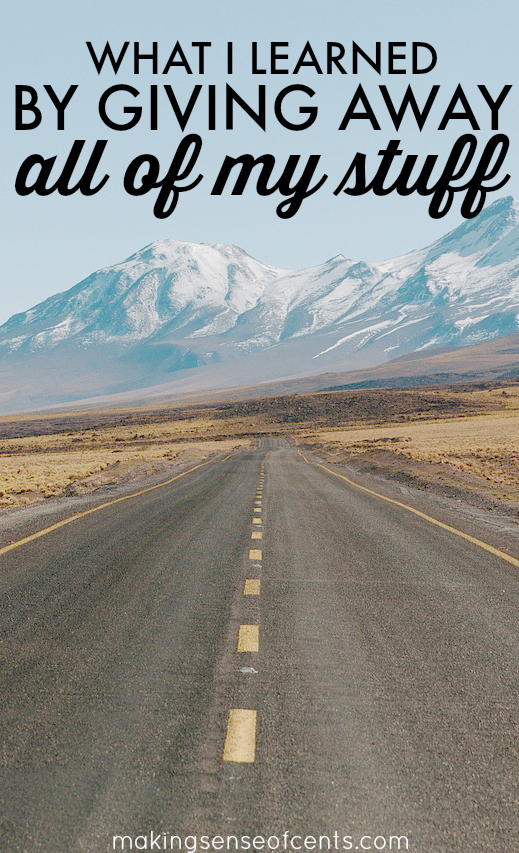 And, it felt great.

Now, we live in a 33 foot RV and are definitely living a minimal lifestyle.

We aren’t the norm, though.

We were fairly close to that size when we owned a house. The house we owned in the St. Louis, Missouri area was around 2,500 square feet, if you included our finished basement, and it was just for myself, my husband, and our two dogs. Our home in Colorado was almost as big, at slightly over 2,000 square feet (with no basement).

However, we decided to buck the norm and started living minimally by completely downsizing our life.

This isn’t to say that we are perfect, though. I used to keep pretty much everything I came across, and my basement was proof of that. I would always say “Oh, but I’ll use that eventually!”

And then, eventually would never come, haha!

All the clutter and everything else that went with keeping everything you’ve ever bought can get annoying.

We made the decision to start living with less stuff for many reasons, but the main reason was that traveling nearly full-time added to the stress of owning a home. So, we figured why not just take it a step further and actually travel full-time?

All of the belongings we have are now inside the RV, except for a few childhood items and photo albums that my dad left me after he passed away. Those are all stored at a family member’s home.

Living minimally has been great, and I’ve learned a lot by giving away nearly all of my belongings.

Below is what I’ve learned by living with less stuff and living minimally.

I have wasted a lot of money in my life.

Okay, so this is probably a given. If I was able to give away nearly everything I’ve ever bought, that means that I’ve probably wasted thousands of dollars in my lifetime.

Knowing this has really helped me understand how to manage my money better.

Now that I realize how much money I’ve wasted, I am much more able to say “no” at the store when debating whether or not I should get something. I now realize that I don’t really need much, and this helps me to only buy what I need instead of things that will just create clutter.

I can also walk into a store and only buy exactly what I need, even if that store is Target!

I have so much more control over my spending and that has saved me a lot of money in the past year.

I don’t need a lot of the things that I once thought I needed.

I kept a lot of things because I thought I needed them for the future. On a regular basis, I probably only used around 25% of the things I had in my house.

Actually, probably even less than that.

I know I’m not alone – many people keep items because they think they may need them in the future. You know the feeling – you buy something, don’t use it right away, and years later you find it but just can’t throw it away in case there is some circumstance where you need that exact item.

If this is you, then you should put a timeline of no more than one year on the item. If you don’t use it in that timeframe, then there’s a big chance that you’ll never need it.

Chances are that you won’t miss it much.

When I think about how much stuff we gave away, I honestly can’t even remember half of the things. Now, I know that I never really needed the majority of those things.

I know this because I have less stuff than I have ever had, and I am happier than ever.

You should only own something if you truly want it. Who cares about what everyone else has!

Giving away nearly everything feels great.

Sure, this blog is all about making and saving money, and I could have easily sold a lot of the things that I gave away for thousands of dollars.

However, it felt great giving it all away, and honestly, it was a lot easier.

If I had to do it again, I would do it all over again.

Life is much more peaceful living with less stuff.

Getting rid of so much stuff has made life much more peaceful. Hanging on to so much stuff for years and years can add an insane amount of clutter to a person’s life, both physically and mentally.

I know this personally because I kept many things, such as clothing, because they were things I held onto after my dad passed away. I kept outfits that I wore the last time I saw him, from his funeral, and so on.

By getting rid of things, I was able to finally let go. Hanging onto those things and looking at them every day wasn’t healthy.

As you can see from the above, living minimally has a ton of positives. One last positive is that it’s very easy to do.

Many people think that living minimally would be difficult because you have to get rid of so much stuff, change your mindset, and more. However, it’s been a very easy change for us.

Having less stuff and spending less money on things we don’t need allows us to spend more time on things we care about and actually want to do. Plus, now we hardly ever have anything break because there aren’t many things in our life that can be broken.

We don’t miss anything, we don’t feel like we need anything – we are happier and much more carefree now by living with less stuff.

Are you interested in living minimally? Why or why not?

The post What I Learned By Donating And Giving Away Nearly All Of My Stuff appeared first on Making Sense Of Cents.